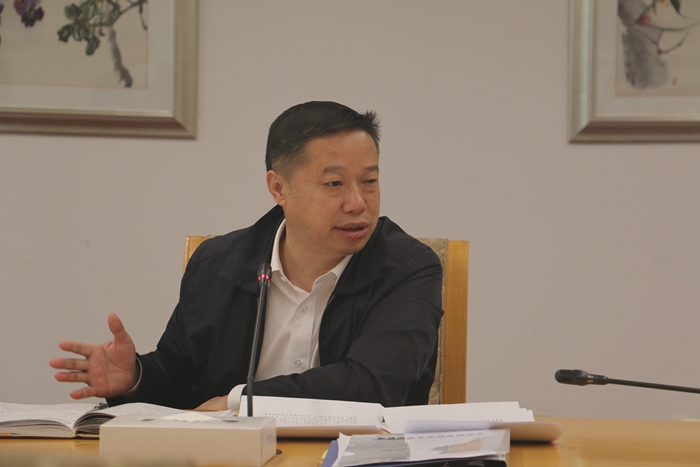 On October 29, 2020, Comrade Tu Gengxin delivered a Party lecture themed on “Thinking about Worst-case Scenarios and Getting Ready to Fight to Forestall and Defuse Ideological Risks” to all members of the CPC branch of the discipline inspection and supervision group stationed at MOFCOM.

To study General Secretary Xi Jinping’ important remarks about ideology, Comrade Tu Gengxin lectured on how to accurately understand and grasp the decisions and plans of the CPC Central Committee on ideological work in the context of today’s domestic and international circumstances, put forward his opinions and suggestions on how to carry out relevant work, and forestall and defuse risks, and made requirements on making the stationed discipline inspection and supervision group more politically sensitive, and on urging the supervisees to implement the system of responsibility for ideological work and properly deal with online public opinions in a timely manner. The Party lecture was rich in content and distinctive in views, and had high political and ideological value. Vivid examples in Tu’s appealing lecture further boosted members’ confidence in the path, theory, system, and culture of socialism with Chinese characteristics, helped them better maintain political integrity, think in terms of the big picture, follow the leadership core, and keep in alignment with the central Party leadership, as well as resolutely uphold General Secretary Xi Jinping’s core position on the Party Central Committee and in the Party as a whole, and resolutely uphold the Party Central Committee’s authority and its centralized, unified leadership. At the same time, in response to the current situation and tasks, Comrade Tu required the discipline inspection and supervision group stationed at MOFCOM to convey in a timely manner the guiding principle of the Fifth Plenary Session of the 19th CPC Central Committee, continue to study in depth the third volume of Xi Jinping: the Governance China, and organize group study and exchange sessions when appropriate.